Tune in to Livestream at 8:30pm ET

As Saturday’s Where I Come From: Tornado Benefit Concert Featuring Alan Jackson draws near, there’s great news for ticketholders and supporters – their contributions to help tornado relief in Jackson’s hometown of Newnan, GA are now going to provide them with a full day of entertainment and music!

Gates to the event site – the Coweta County Fairgrounds (275 Pine Rd., Newnan GA, 30263) will now open at 1:00pm ET; music will begin about an hour later. Organizers have added some fantastic local and regional talent and expanded planned food and beverage options, turning the Where I Come From event into a real celebration of what’s possible when people come together to support a common goal. This expanded timeline will also ensure that those who choose to arrive early are entertained throughout the day.

Parking for the event will be available early to accommodate this updated start. In addition to the limited onsite parking at the Fairgrounds, other nearby off-site lots are available (map HERE). Lots will open at 11:00am ET; all parking will cost $20.00 and include a shuttle to and from the event site. All lots will be cash-only, and net proceeds from parking will go to the Coweta Community Foundation’s Tornado Relief Fund. Organizers encourage carpooling and patience with the arrival process.

Additionally, private lots will also be available. Rideshare (Uber/Lyft,etc.) drop-off and pickup is available (on Pine Road across from the Fairgrounds entrance). Hired buses or shuttles (with driver) can drop off at the Fairgrounds, but must stage outside of the Fairgrounds site.

The June 26 concert headlined by Jackson finds the Country Music Hall of Fame member joined by multi-platinum entertainer Chris Young, singer-songwriter-producer Caylee Hammack, Grammy-nominated singer-songwriter Adam Wright and country artist “Big City” Brian Wright, the latter two both – like Jackson – Newnan natives. Music from this billed lineup will begin shortly after 4:00pm ET. Jackson’s performance will also be livestreamed exclusively via Facebook, not only to allow anyone who missed out on a ticket to virtually attend, but to create nationwide and global awareness of the event and opportunities for people all over the world to offer support.

Jackson is headlining the event in his hometown of Newnan, Georgia to assist those impacted by an EF-4 tornado that ripped through the town in March. Proceeds from Where I Come From: Tornado Benefit Featuring Alan Jackson will benefit the Coweta Community Foundation’s Tornado Relief Fund. The event at the Coweta County Fairgrounds in Newnan sold out within hours of going on sale, but organizers continue to encourage donations to the fund via the Foundation’s website.

Cornerstone Building Brands is the presenting sponsor of Where I Come From: Tornado Benefit Featuring Alan Jackson. The event is driven by Southtowne Chevrolet. 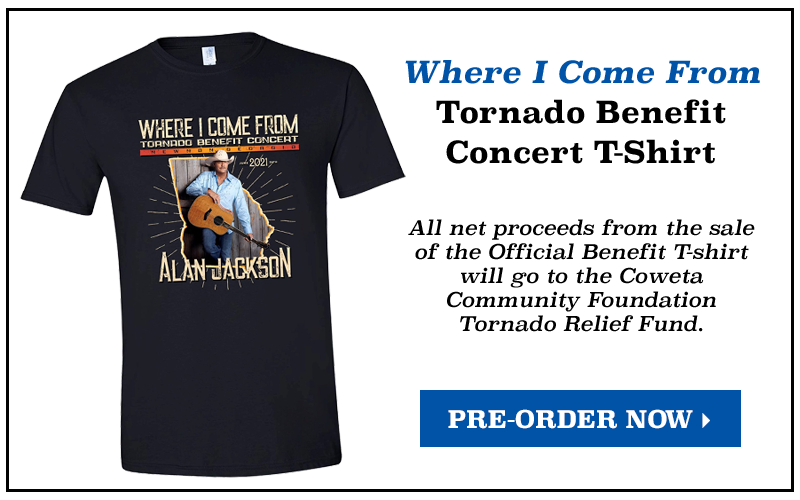 There are several ways to make a donation: