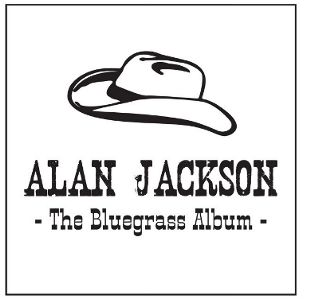 Country music's Alan Jackson ventured into the Bluegrass Music arena with his latest project, The Bluegrass Album. This is the first Country to Bluegrass artist to hit the mark and hit it dead center. Jackson is quite the bluegrass songwriter! His songs on the album are what makes this project so unique. Jackson literally nailed it with this release. This is bluegrass done right.

From the opening track, "Long Hard Road," the music, lyrics and sound are what today's bluegrass should sound like and, it does. "Appalachian Mountain Girl" is another Jackson original that confirms he can play solid bluegrass music. Jackson's originals have the heart and soul of bluegrass deep to the core. "Blue Ridge Mountain Song" is another fine example of the storyline ballad style accompanied by solid instrumentation.

By bringing a host of top bluegrass musicians into the mix, Jackson achieved a bluegrass sound. From Adam Steffey's mandolin to Rob Ickes Dobro and Sammy Shelor's banjo the combination rings true to a genre that often is intolerant of deviations. On The Bluegrass Album, the boundaries are definitely stretched but, in a way that even hard-core bluegrass fans will enjoy.

We've heard other attempts of Country starts attempting bluegrass albums so, naturally, I was going to be skeptical going in with this one. While I'm a long-time Alan Jackson fan and a bluegrass fan, I didn't place any bets. Jackson has produced probably the first real bluegrass album by a country music star. This album captures what the essence we call "bluegrass" is all about.

There are the traditionals of bluegrass such as Bill Monroe's "Blue Moon of Kentucky" and "There is a Time" by Rodney Dillard/Mitchell Jayne that carry on the tradition. While Jackson's voice isn't the "High Lonesome" of Monroe, he does justice to these landmarks of bluegrass music.

On the slower more traditional country sounds of bluegrass like "Mary" Jackson again puts it all together with tasteful lyrics, tight instrumentals and emotion. Another wonderful story song, "Knew All Along" is handled perfectly by Jackson. Traditional country always had a hook line, frequently with multiple interpretations, and "Ain't Got Trouble Now" is a prime example of that tradition. With a bluegrass influence to traditional country, making it work is easier said than done. Jackson paves new ground to success on a path where others have come up short. Jackson's effort is pleasantly surprising.

Jackson's songwriting artistry is highlighted on The Bluegrass Album. This is one of those rare albums that leaves you hungering for more. The album is scheduled to be released September 24, 2013.