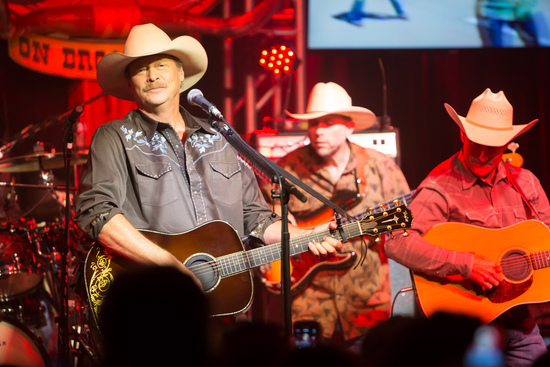 NASHVILLE, Tenn. — Alan Jackson surprised fans this evening by performing a concert at The Stage, a honky-tonk music venue on lower Broadway in the heart of downtown Nashville. Jackson performed numerous hits and during the show brought up special guests Lee Ann Womack on "Golden Ring," Kacey Musgraves on "Livin' On Love," and Easton Corbin for "Where I Come From." The unsuspecting fans received a very unique CMA Music Fest experience.

The surprise concert followed the CMT Music Awards where Jackson was honored with the first ever CMT Impact Award, for 25 years of innovative, unique and crowd-pleasing music videos ranging from “Chattahoochee” to “Don’t Rock the Jukebox,” “Gone Country,” “Drive,” “Where Were You (When the World Stopped Turning),” “Remember When” and, most recently, “Blue Ridge Mountain Song.” Country superstar Carrie Underwood presented him with the award, after the audience was treated to visual highlights spanning the breadth of his ongoing career, through the present. Frequent Jackson collaborator and longtime friend Lee Ann Womack teamed with critically-acclaimed singer-songwriter Kacey Musgraves to perform his #1 hit “Livin’ on Love.”

Jackson’s career to date includes more than 60 charted singles and 55 released music videos, illustrating his prolific impact on country music…not to mention his ongoing embrace of videos as a creative extension of his music and a means of sharing his songs with fans.