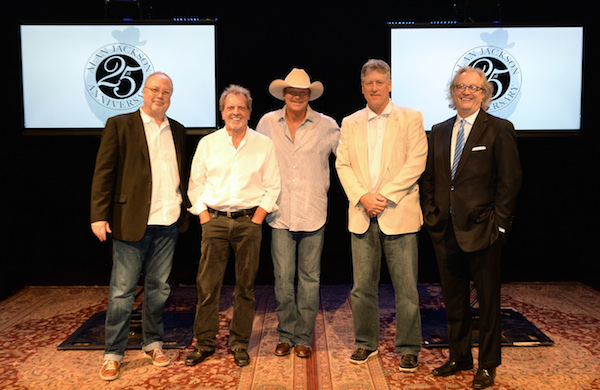 NASHVILLE, Tenn. - Superstar Alan Jackson held a press conference this morning at the Country Music Hall of Fame in Nashville to announce a year-long celebration of his 25th year in the music business.

Gerry House, longtime Nashville radio personality and member of the Country DJ Hall of Fame, brought his trademark humor and wit to lead the press conference. After introducing Mike Dungan, Chairman and CEO of Universal Music Group (UMG) Nashville…John Huie, Partner of CAA (Creative Artists Agency) Nashville…and Kyle Young, Director of the Country Music Hall of Fame® and Museum…House brought out the man of the hour to a standing ovation and thunderous applause.

Jackson’s 25th anniversary celebration is a multi-faceted undertaking that will celebrate his countless – and ongoing – contributions to country music. Dungan, who first worked with Jackson at the start of his career, noted UMG Nashville’s continuing musical partnership with the venerable singer-songwriter, including new music in the coming months. Huie announced plans for a special 25-city, 25th anniversary tour by Jackson, slated to officially begin in 2015. And Young unveiled plans for a special 25th anniversary collaboration with Jackson that will include a Country Music Hall of Fame exhibit and Jackson’s participation as the Hall’s next Artist-in-Residence. 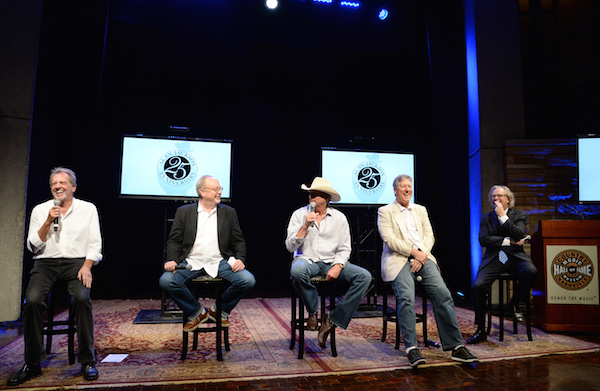 On Friday, August 29, the Country Music Hall of Fame® and Museum will unveil a new exhibit highlighting Alan Jackson’s 25-year career. Additionally, he will be the museum’s next Artist-in-Residence, delivering a unique series of intimate performances later this year; dates and details will be released soon. Jackson is the first artist to be subject of a museum exhibit while serving as Artist-in-Residence. The new, expertly curated exhibit will give fans a deep and personal look into Jackson’s career and personal life, showcasing such things as awards, instruments, clothes and personal mementos, including many that will be easily recognized from his concerts, albums and music videos. The exhibit will include many never-before-seen treasures that are of special meaning to Jackson, all on display for the public to enjoy.

Alan Jackson’s 25-year career has made him one of the most-recognizable faces in music – since signing his record deal in June 1989, he’s achieved heights that most people can only dream of. He has sold nearly 60-million albums worldwide and ranks as one of the 10 best-selling country artists of all-time…those albums have spawned more than 60 charted singles – more than 50 of them went on to become Top 10 hits and 35 of them climbed all the way to #1 (24 of them written or co-written by Jackson, an accomplishment that puts him on par with Paul McCartney, John Lennon and Merle Haggard among the select few artists to write and record that many of their own chart-topping songs). His music has earned him 18 ACM Awards, 16 CMA Awards, a pair of Grammys, induction into the Nashville Songwriters Hall of Fame, ASCAP’s Founders Award, and membership in the Grand Ole Opry – he has received more than 150 major music industry awards.

But the numbers and the accolades only tell a portion of the story – over the last 25 years, Jackson has written and recorded songs that have captured people’s imagination and told their stories, as well as his own. He’s given us the carefree summer spirit of “Chattahoochee,” offered glimpses of his childhood in ”Where I Come From” and “Home,” shared his parents’ story through “Livin’ on Love,” led us onto the dance floor with “Don’t Rock the Jukebox” and “Good Time,” reflected on his own life and family in “Drive” and “Remember When,” and captured the confusion and pain of a stunned and wounded nation in “Where Were You (When the World Stopped Turning).” Jackson’s music has touched and impacted the lives of people around the world, an accomplishment that can’t be measured, counted or calculated…and that may be the greatest success of his quarter-century career.

Jackson’s concert performances have been an undeniably huge element of his 25-year career. He has played to millions of fans…and his tours take him coast-to-coast across the U.S. and Canada every year. He has thrilled crowds in such far-reaching corners of the globe as Scandinavia, Brazil and Australia, where his first visit in 2011 became the fastest-selling country tour in Australian history. Along the way, he’s shared the spotlight with such peers as George Strait, Jimmy Buffett and Brooks & Dunn…been joined onstage by such friends as Martina McBride and Lee Ann Womack…and his eye for new talent has given many country music fans their first exposure to such now-known names as Brad Paisley, LeAnn Rimes, Rascal Flatts, Little Big Town, The Band Perry, Sara Evans, Jake Owen, Brantley Gilbert and Chris Young…as well as such rising stars as the Eli Young Band, Kip Moore, David Nail and Craig Campbell. He has played venues as small as CBGB’s…as large as the Astrodome…as revered as Carnegie Hall and the Ryman. Jackson’s prominence as a leading touring artist for more than two decades is among the factors that have made him a three-time CMA Entertainer of the Year…and one of only five artists to achieve the honor that many times.

Jackson’s announcement was attended by many fans visiting Nashville for the annual CMA Music Festival. Less than 12 hours earlier, Jackson thrilled – and surprised – festival-goers with an impromptu late-night show at a downtown Nashville honky-tonk, The Stage; his unexpected performance came just a couple hours after he was honored on live television at the CMT Music Awards with the program’s first-ever Impact Award. 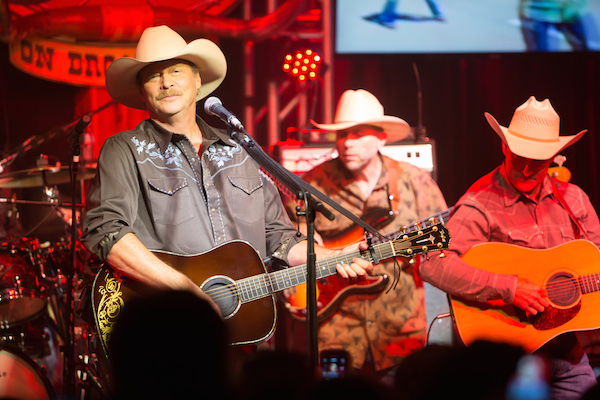